My Journey to Affirming the Ordination of Women (Part VII)

I now come to the biblical text that is often played as the trump card by complementarians when discussing the issue of women’s ordination–and I speak from personal experience, having played this card myself. Indeed, 1 Timothy 2:8-15 was the text that gave me the most pause when I reconsidered the issue; I felt that I could accept that other passages speaking of male leadership were culturally relative, but this passage seemed to be quite clear and rooted in the prelapsarian (“before the Fall into sin”) created order.

However, even as I often used 1 Timothy 2:8-15 as a proof-text against women’s ordination, I never thoroughly researched and presented a positive case for what the text is affirming rather than forbidding. When I began to reëxamine the issue, I found not only that was I unsure what Paul is affirming, but that there is actually no consensus among complementarians about the meaning of this passage.

This is a series about a personal journey to a change of mind, not a thorough argument. It was the mounting uncertainty about the meaning and correct complementarian application of this passage that forced me first to a place of agnosticism on the issue, and then to becoming convinced of a culturally-relative, contextual reading of this passage (which, I believe, ultimately supports the egalitarian position).

In my first-semester hermeneutics class at Christian university, I was taught a solid principle of interpretation by my complementarian (probably better described as “patriarchalist”) professor: difficult or obscure passages should be interpreted in light of clearer passages, rather than the other way around. We find this idea even in confessional documents such as WCF 1:9: “The infallible rule of interpretation of Scripture is the Scripture itself: and therefore, when there is a question about the true and full sense of any Scripture (which is not manifold, but one), it must be searched and known by other places that speak more clearly.”

This idea is the premise of Jamin Hübner’s article, “Revisiting the Clarity of Scripture in 1 Timothy 2:12,” originally published in JETS and then republished in shorter form in the Priscilla Papers. I highly recommend Hübner’s article, which outlines these basic principles of interpretation and then proceeds to demonstrate the high concentration of obscure terms in 1 Tim 2:8-15 and the wide variety of complementarian interpretations (he identifies no fewer than nine different readings of verse 12).

Moreover, even though men might naturally tend more toward pugnacity or dissension than would women, and even though women might be more likely to fall prey to the sin of immodesty than would men, everyone should see that both sets of universal principles apply to men and women: women also should worship in peace, joy and reference, and men also should dress modestly so as not to draw attention to themselves and away from God. A man who dressed or behaved immodestly would be in violation of 1 Tim 2:9-10, just as a woman who was creating dissension or being argumentative would be in violation of 1 Tim 2:8.

We have seen that verses 8-10 give culturally-relative commands for men and for women, behind which stand universal principles that apply equally (“by good and necessary consequence”) to both men and women. As we look at verses 11-15 and see relatively obscure and unclear terms, the immediate context and our hermeneutical principle of “the clear illumines the obscure” should make us cautious about drawing universal prohibitions from these verses.

There has been much debate about the meaning of αὐθεντεῖν (2:12), which does not appear elsewhere in the NT (a hapax legomenon). It is traditionally translated “to exercise authority,” but egalitarians argue that a better translation is “to domineer” or “to usurp authority.” The double usage of the phrase ἐν ἡσυχίᾳ (“in quietness”; 2:11 and 2:12) seems to remedy the problem of disruption in public worship. Perhaps some women were abusing their new-found freedom in Christ to interrupt the ordained leaders (probably male in this context) with questions or insights.

However, we see that this passage still elevates women by encouraging them to learn (μανθανέτω, 2:11). Jewish, Greek and Roman men did not always see the need to educate their daughters, who were seen as primarily useful for making advantageous marriages and bearing children. No doubt there were some educated women, but men were more likely to have been educated such that they could participate in the reading and exposition of OT scripture and the apostolic writings.

The references to Adam and Eve in verses 13-14, the order of creation (Gen 2), the Fall into sin and the curses on Adam and Eve (Gen 3) have been the subject of much debate. Complementarians argue that these verses teach a hierarchy rooted in the prelapsarian created order, pointing to the fact that the Man names the Woman (Gen 2:23), which is often a sign of authority. They also argue that the curse that the woman would resist her husband’s authority (Gen 3:16) presumes a benevolent authority of man over woman, which was perverted by the Fall. Egalitarians point to the equality and complementarity of man and woman in Genesis 1 and 2, and argue from Genesis 3:16 that the notion male authority over women is part of the curse for sin, which has no place in the body of Christ, whom God has redeemed from the consequences of sin. If hierarchy of authority is part of creation, then complementarians have a point. But if authority is a result of the Fall, then the church should be a place where that is reversed.

It is not common for complementarians to argue in this way today, but in previous eras it has been suggested from 1 Tim 2:13-14 that women were inherently spiritually or intellectually weaker than men and thereby more susceptible to false teaching (as Eve with the serpent). Yet we learn from Genesis 3:6 that Adam was with Eve the whole time while she was conversing with the serpent, and didn’t correct her. Moreover, Adam seems to have failed in his responsibility to transmit God’s command concerning the tree to Eve (compare Gen 2:16-17 to 3:3). Elsewhere, Paul places blame for the fall on Adam exclusively as the representative of humanity (Rom 5:12-21). We should not infer from 1 Tim 2:13-14 some sort of essential female unfitness to teach or discern as leader of a church. Yet we do hear complementarian objections to female pastors on this basis–a certain female pastor is “liberal” or mishandles the Word of God, thereby demonstrating that women aren’t fit to be pastors. (I will address a related objection in a later post, but I think it is a problem of selection bias.)

Yet another reason for caution in an overly-broad application of this passage is the very obscure statement in 1 Tim 2:15 that “women will be saved through childbearing.” A variety of interpretations are offered by complementarians and egalitarians, but there is no agreement on what this means. I have suggested that the burden of proof should be upon those who would prohibit half the global church from preaching or holding ordained office, and this passage does not help the complementarian case that 1 Tim 2:8-15 is the “clear passage” through which all other texts should be interpreted.

What is Being Corrected?

If 1 Tim 2:11-15 follows the preceding verses in giving commands that are intended for a specific cultural context, then we still have a universal principle that is commanded in this passage–albeit a different universal principle than the complementarian interpretation. Hübner offers this helpful chart to demonstrate the differences (“A New Case for Female Elders: An Analytical Reformed-Evangelical Approach,” 259): 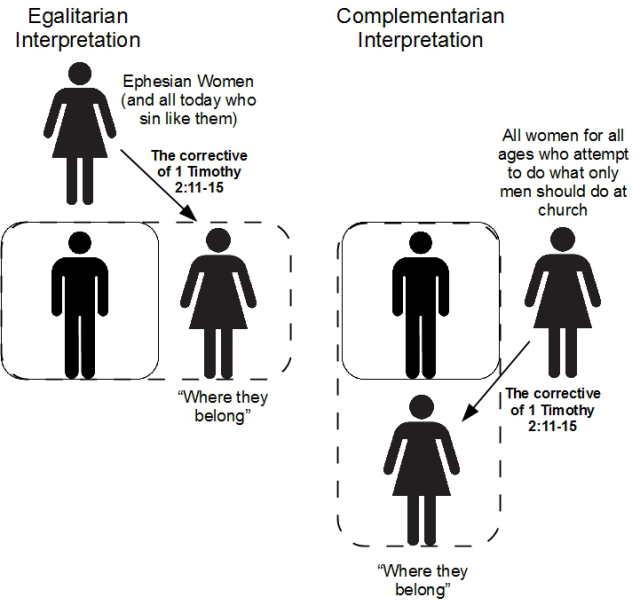 The references to Genesis 2, then, are not an appeal to “the creation order” to establish male primacy/superordination/headship in regular church teaching ministries (e.g., the eldership), as if to say, “women should never teach and exercise authority over men in church because you just weren’t made for it” or “because such actions violate male headship” (Schreiner 2010:45). Paul’s general attitude is not “you can have authority over a man’s body for sex (1 Cor 7) and convert the lost and plant churches as a traveling missionary/evangelist (Rom 16:7; Phil 4:2-3) and prophesy (1 Cor 11; Acts 2; 21:9) and all those good things, but ladies, don’t preach the gospel to the guys at church. That’s just wrong!” And Paul certainly isn’t basing his argument on any kind of inferiority of woman (see Witherington 1991:122). Rather, Paul is simply pointing out the irony of the situation and shoring up reasons, in his own way, why the disruptive women should settle down and behave more like Christ. In effect, then, he says, “you should learn quietly and respect your male teachers while in church (otherwise you’re not going to learn anything); you’re not any smarter than them (have you noticed the history of deception?) nor fundamentally better than them (have you forgotten where you originally came from?). So settle down and be humbled.” (Hübner, “A New Case,” 258)

In my next post, I will demonstrate the inconsistency and fundamental incoherence of complementarian applications of 1 Tim 2:8-15. But for now, I will conclude with this question: In the context of this chapter and the Pastoral Epistles more broadly, is 1 Tim 2:12 more likely to be a universal command, or one designed to deal with a specific situation in the Ephesian church that nevertheless gives a universal principle? I believe it is the latter.

I’m a native North Jerseyan, transplanted to Pennsylvania...lived and taught in Eastern Europe for six years…Old Testament professor, ordained minister, occasional liturgist…husband to Corrie…father to Daniel and Elizabeth.
View all posts by Benj →
This entry was posted in Bible-Theology and tagged Women's Ordination. Bookmark the permalink.